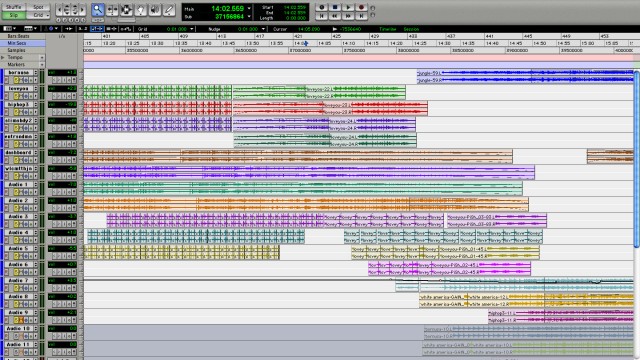 Futility is a sound collage using a selection of the music that has been employed by US forces/intelligence for “interrogation,” torture, and psychological warfare. Government documents describe the use of this music as a technique named “futility”:

“Technique: Authorized: FM 34-52 technique – Futility – Act used to highlight futility of the detainee’s situation. … On numerous occasions between July 2002 and October 2004, detainees were yelled at or subjected to loud music during interrogation. ”

The piece has been presented on concert/screening programs with sound and video art. I ultimately imagine it as a continuously sounding installation. It was very difficult to work for hours a day on this piece, so I can only begin to image what it is like to have this music played repeatedly at very loud volumes for days on end.

The songs drawn from here are: Metallica, Enter Sandman; Barney the Purple Dinosaur, I Love You; Eminem, White America and The Real Slim Shady; Meatloaf, Paradise by the Dashboard Light; Bruce Springsteen, Born in the U.S.A.; and Guns n Roses, Welcome to the Jungle.